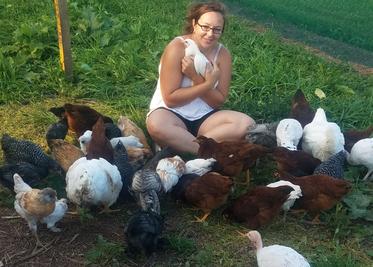 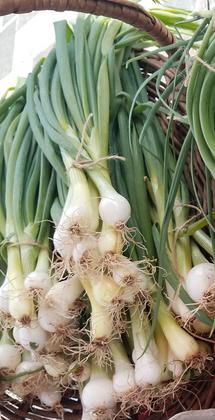 -Onions are a great addition to most dishes! Spring onions are the first to arrive in the season. They are smaller, tender and you can even eat the green top! Red and yellow onions come in towards the end of June and can be added for color, crunch, or flavor.

-Our large sweet and red onions come in later in the season, usually being harvested in mid-July. Then they are hung so they can dry and last throughout the winter! Onions varieties come in three groups: Short, Intermediate, and Long day varieties. Depending on where you live decides which kinds you should grow to get the best results.

​Here is a vegetarian recipe from Amuse Your Bouche for Cheese and Onion Stuffed Flatbread:  http://www.amuse-your-bouche.com/cheese-onion-stuffed-flatbreads/ 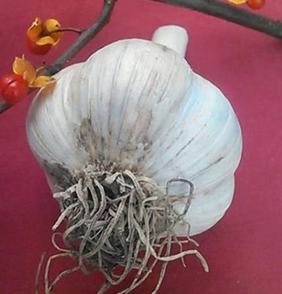 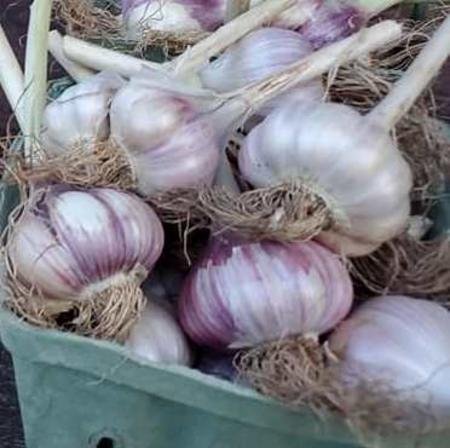 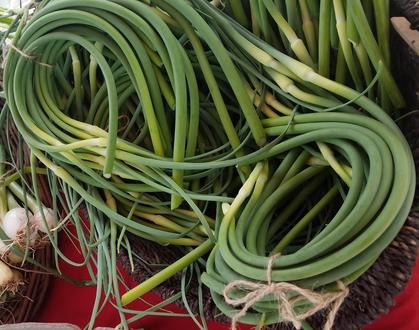 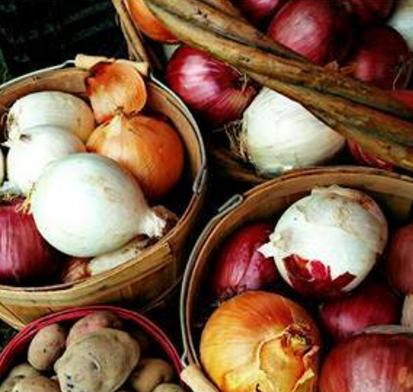 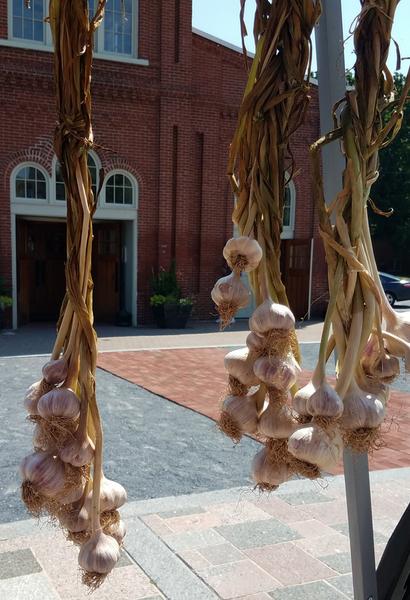 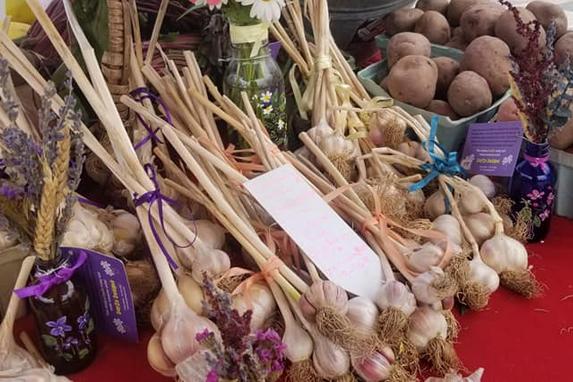 Colors of white and pink or rose, strong and mild, soft and hardneck... "Much to learn you still have...my old padawan." (Star Wars- Yoda)

When it comes to garlic, the possibilities are endless! I usually carry several varieties, each with there own unique characteristics. I try new varieties all the time, but maybe one day I'll settle down with a favorite! Currenyly, our favorite hardneck is Chesnok Red and our favorite softneck is Nootka Rose.

****Author's Note**** Your soil composition will affect the taste of everything you produce. Just because we have varieties we like or do not like, you may have different results, so don't be scared to try things, even if we didn't like it from our farm.

Garlic comes in many different varieties, which are grouped as either a softneck or hardneck. This makes them easy to figure out when you're growing them, because (it's really self explanatory) softnecks have soft... necks and hardnecks are have hard... necks (Photos on the left show the hard stem). Simple enough! :) I am currently trying to accrue at least one type of each.

The Artichoke group includes varieties like Italian, Inchelium, Artichoke, California, Polish, and many other kinds. The bulbs have several layers of smaller cloves with the total number of cloves ranging from 12-20. So far we've grown Lorz Italian and California. During our garlic tasting, Lorz Italian was our least favorite. California is our 2020 variety, and so far it's the variety doing the worst in our field. However, in its defense, I did have turkeys and chickens helping while I planted it, they were trying to eat it!

The Silverskin group includes one of my favorite varieties, which is Nootka Rose. It was the best tasting variety we have yet to grow, and is in the field for 2020! The bulbs of this variety are just like those of the Artichoke group, smaller cloves with 12-20 cloves per bulb. Silverskin do store longer than the Artichoke varieties. Other varieties include a type of California, Silver White, Mild French, Idaho Silver, and many others.

Not gonna lie... this group is the one I get the most excited about. Yes, Nootka Rose was the most delicious garlic we tasted, but....

Hardnecks are usually the preferred flavor of chefs. They are known for a pungent garlic flavor even after cooking. Harnecks also have different levels of heat when eaten raw that compliments many dressings. Once cooked though, this heat usually completely dissipates. I am currently on the search for varieties that maintain that heat after cooking.. it's going to be deliciously spicy!!

Garlic Scapes are also produced by Hardneck varieties. When you grow hardneck garlic varieties, the scape is a green stem that grows out of the top of the green leaves, and is actually a potential seed pod. If you do not cut the scape off, the garlic plant will focus it's plant energies on developing the seeds in the tip of the scape causing the cloves of the bulb to be smaller. Another bonus to cutting the scape early is that you can eat it! Garlic scapes are soooo tasty!! You can use them fresh any way you use garlic or you can store them by pureeing them with your favorite cooking oil (I use olive oil), then freezing them in containers. I use those small wonton soup containers, pulling one out when I want use it and then storing it in the refrigerator until gone (sometimes this is a few weeks).

Asiatic varieties have 6-9 cloves per bulb and usually have a spicier flavor. These varieties often have a skin with that lovely purple color and the cloves come in lovely shades of white and yellow. These varieties should be harvested as soon as the leaves start to brown in July to keep the wrapper which protects the cloves from splitting. Some of the varieties include Korean Red, Japanese (this is the variety we have), Pyong Yang, and a few others. This group doesn't store for more than half a year.

creole​ varieties has bolder coloring in the skins than the Asiatic group. They also have great heat when eaten raw. I believe I'll find my variety that holds it heat after cooking in one of these two categories, possibly the Turban group you'll read about below. This variety has 8-12 cloves per bulb, and include varieties such as Ajo Rojo (sooo pretty!), creole red, burgundy (we are growing this, it's super spicy raw), and many other varieties. Creole varieties can store for up to a year.

Porcelain varieties have a thick, white skin for which they are named for. It is a vast group that has varieties that store for only a few months or up to a year. German White, Music, Elephant Garlic, and many others. The cloves are very large, elephant garlic having the largest. The bulbs usually only have 4-6 cloves. We grow music and it has a great flavor being a standard we recommend to your average garlic lover.

Purple Stripe​ is separated into three categories: Standard, Glazed, and Marbled. All have the distinct purple stripes in their wrappers, but have some genetic differences that cause a need for the subcategories. Chesnok Red is currently our overall favorite hardneck that we grow, and is one of the Standard types, Purple Stripes range from  4-12 cloves per bulb, with a mild heat when used raw. Some other varieties include Russian Red, Metechi Bulk (Marbled); Persian Star, Red Grain (Standard); and Purple Glazer, Brown Tempest (Glazed).

Rocambole is the most broadly known group often described as one of the best tasting with the Spanish Roja variety being one of the more popular among chefs. On our farm we have two varieties: German Red and Ukraine Purple. The bulbs range from 7-11 cloves, and pack some heat when eaten raw, but nothing like the Asiatic, Turban, and Creole groups. This group is not know for having thick skins, so it cannot be left in the ground too long once it's ready to be harvested. This fact also contributes to its short storage time of 4-6 months.

Turban varieties are spicy when eaten raw. For 2020, I am growing Shadong (a 2019 repeat), Lotus, Tzan, and Early Portuguese. Three varieties are new types I'm trying to see if they hold their heat after cooking. The bulbs are made up of 8-12 cloves encased with purple tinged wrappers. Turbans usually store for no longer than four months. 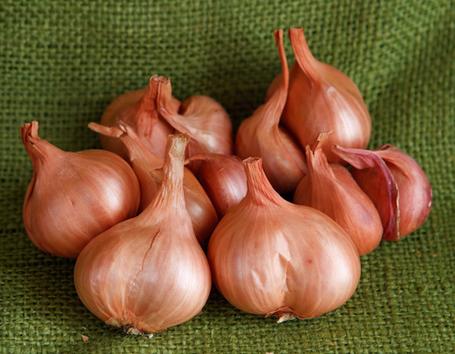 This year we have Dutch Red Shallots which will be available in mid to late summer. They usually have a mild flavor, and can have a yellow or red skin. These also have different storage limitations, so be sure to ask us about the varieties they have if you plan to keep them over winter!

Learn storage tips for all your allium crops, including shallots, and garlic at The Yummy Life:: http://www.theyummylife.com/store_onions_garlic_shallots

WHAT IS ALLIUM? Allium is the name of the genus, which includes leeks, shallots, onions, garlic, chives, and several others including many ornamental kinds. According to Wikipedia, Allium is Latin for the word garlic and its seeds grow on scapes, but are also delicious!! The Culinate.com site provides a more detailed look into each of the the different allium vegetables to help you understand the differences (Spring onions and scallions are one that used to confuse me). Check out these sites for more information: http://en.wikipedia.org/wiki/Allium#Cultivation and http://www.culinate.com/articles/culinate8/meet_the_alliums.